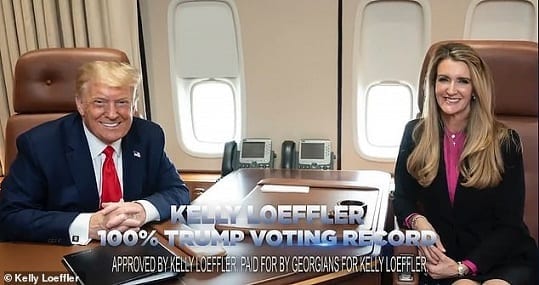 On the campaign trail and in her campaign ads, Senator Kelly Loeffler often mentions she has a 100 percent voting record with President Donald Trump. While this sounds great for Sen. Loeffler, it is not 100 percent true. If we were the Washington Post, Loeffler would earn three Pinocchios.

What Loeffler would love GOP voters to forget, is that she went against President Trump and voted for NDAA legislation that would rename military bases named after Confederate generals.

“The Republican-controlled Senate on Thursday overwhelmingly passed a defense appropriations bill that calls for renaming U.S. military bases that honor Confederate officers — a provision that President Trump has threatened to veto.

The Senate’s 86-14 vote to approve the annual National Defense Authorization Act (NDAA) is more than enough to override a veto, should the president follow through on his threat. The vote comes days after the House passed a similar version of the $741 billion bill.”

You can see the vote at the link below

President Trump was very vocal in his opposition to renaming the military bases as you can see from this article from the Washington Post on July 1, 2020 – way before Senator Loeffler voted against Trump.

While Loeffler may vote with the President most of the time, they aren’t in 100 percent agreement.